Our latest growth capital update reveals that tech deals no longer rule the roost in 2018. Online B2B services gave tech deals a run for the growth-capital money this quarter, equalling the sector’s 16% of overall deal volume in the first nine months of this year.

Institutions led deal-doing again this quarter, with 70% of the total number of deals led by such backers. VCT fundraising for 2017/2018 recorded its second highest total, with £728 million raised in the 12 months to April, just marginally shy of the £779 million record in 2006.

Provision of growth equity funding is strong and growing, and we expect activity to continue apace. The brakes put on some investment decisions do not seem to be impacting growth equity in the £1-15 million space, possibly because businesses at this level of development tend to be less impacted by external factors such as Brexit. This, combined with the high sums raised by investors, should mean these businesses continue to grow with the finance and expertise these backers can provide.

Overall, UK growth equity fundraising in the first nine months of 2018 has already outstripped activity for the whole of last year, with £1.85 billion recorded thus far, against £1.70 billion for the whole of 2017. Q3 saw £659 million invested into 137 deals, a great quarter following on from a record Q2, which saw £715 million deployed across 144 deals. The two consecutive strong quarters mean this year is already a record for growth equity capital in the UK. 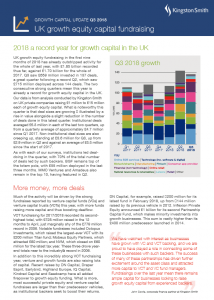