UK Growth Capital experienced a very strong first quarter of 2017, with a 29% increase in funds raised compared with the same period last year. This spectacular trajectory sets 2017 up to be a record-breaking year. The Q1 activity comprises 111 transactions with £464 million raised.

Kingston Smith’s research covers mid-market range transactions in which UK private companies have raised between £1 million and £15 million, involving the issue of equity. Institutional fund managers account for the majority of the activity.

Particularly notable is the increased activity in the software and biotech sectors, and a surge in investment on the part of overseas funds and other overseas investors. This positive upswing is aligned with recent data on venture capital investment which has also soared in Q1.

Factors driving the increase include a strategic interest from overseas in UK business, the robust supply of funds in the UK, the strength of the UK economy and a supply of compelling investment opportunities in the UK. Investors who cautiously paused their activity to monitor the effect of Brexit on the UK economy may also have contributed to the upswing now that they have regained the confidence to invest. 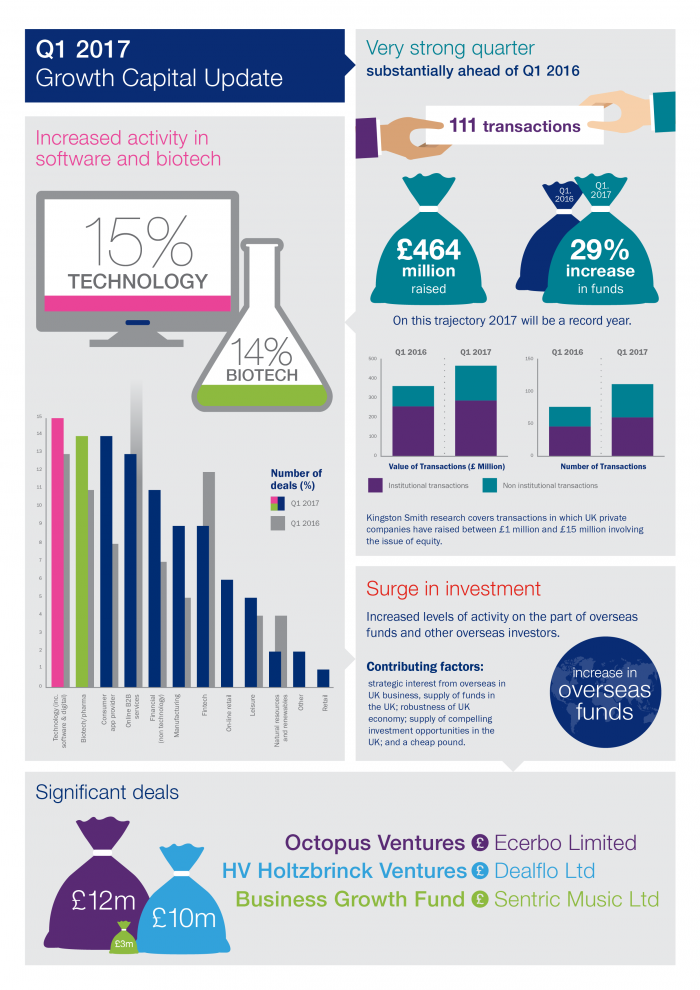 Kingston Smith corporate finance director, Jonathan Garbett, said: “The results of the first quarter of 2017 show a huge and very encouraging surge in fundraising. The message that the UK is open for business seems to have countered the uncertainty caused by Brexit. The cheap pound certainly hasn’t hurt either.”

Kingston Smith has analysed transactions by UK based companies that involve the issue of less than 50% of share equity share capital to third parties and funds raised of between £1 million and £15 million. Accordingly, these numbers do not include senior debt and mezzanine debt fund raisings and smaller fund raisings by companies and start-up funding unless more than £1 million is raised. Start up funding is generally very much less then this amount.

The research aims to capture all transactions by UK companies that fall within the criteria but inevitably we expect that there will be transactions that have take place but have not been captured.

The research is based exclusively on data extracted from the Zephyr database of M&A transactions, published by Bureau van Dijk.

Institutions are defined as organisations in which full time investment professionals are in place with access to assets under management or proven investor networks. We include companies undertaking corporate venturing transactions.